Finding the right graded readers for your level

Graded readers are a great tool for practicing Chinese. The trick is finding materials that are appropriate and fun to read, and a big part of that is using level-appropriate vocabulary. Nothing gets me to put the book down faster than having to look up every other word.

So if you’re picking books to read, you’re probably trying to answer a few questions, e.g.:

I've linked below to data comparing 100+ titles. But here’s one example:

Secrets of a Computer Company is a book aimed at lower intermediate readers. It’s labeled as “Level 2: 500 Words”. In this case, the book uses 470 different characters and 800 different words. It’s roughly at the HSK 3 level, and over the full story, 96% of the characters used also appear on the HSK 3 word list.

But there are literally thousands of words that can be made from the characters in the HSK 3 list. A better measure of how accessible the book is would be how much of the book is covered if you only know the 600 HSK 3 words themselves (versus if you happen to know all possible words made from the characters that appear on that list). In this case, the answer is that those 600 HSK 3 words cover 86% of the text of the story. 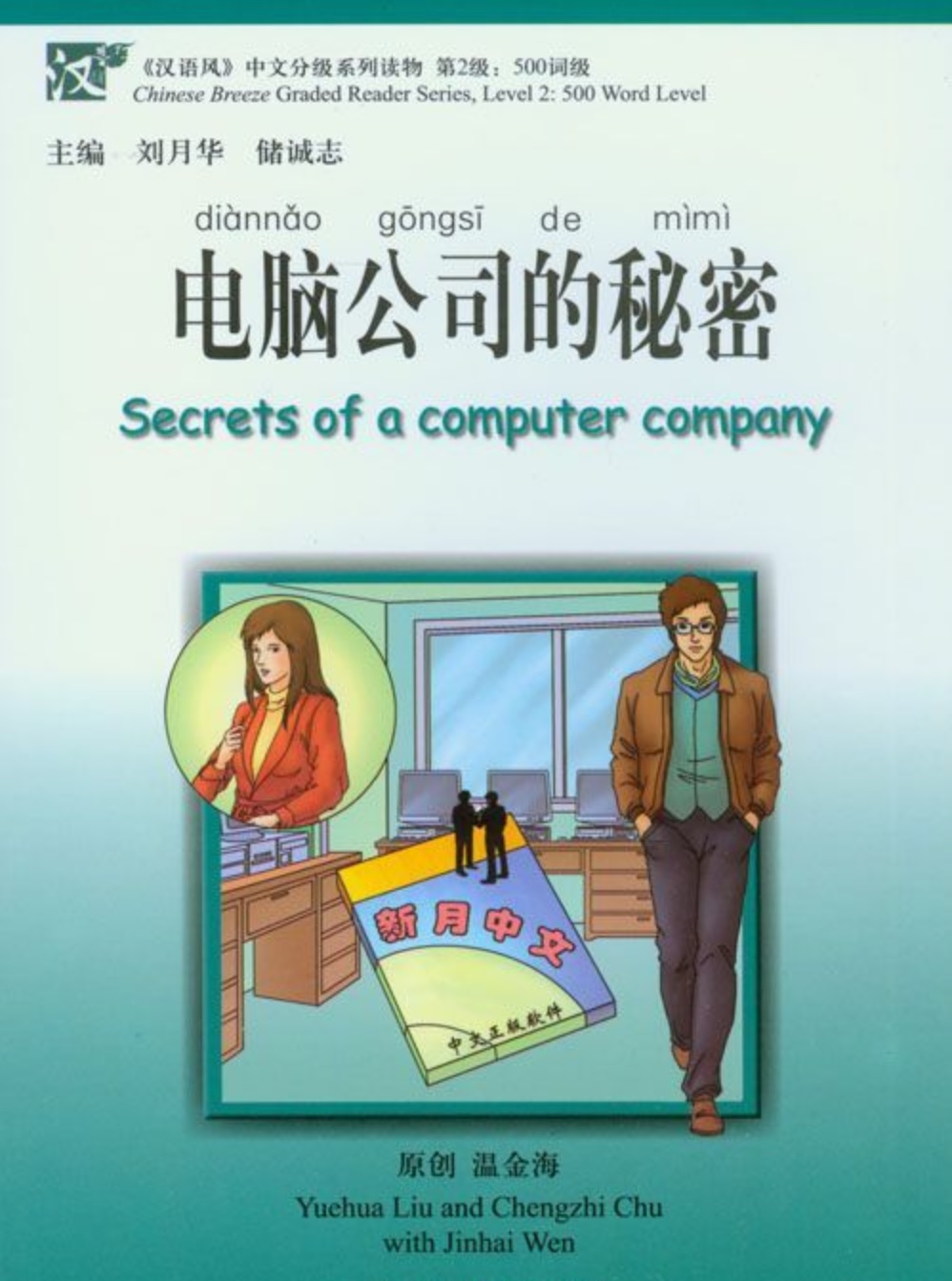 Of the remaining pieces, a good fraction (about a third) are the names of places and characters, which show up repeatedly and so are pretty easy to learn on the fly. Some are special words that show up so many times that you’ll have learned them by the end (e.g. 软件, which means “software”). And many words that aren’t on the HSK lists are nonetheless so similar that you could guess their meaning pretty easily, especially using the context of the story (e.g. 男子, which isn’t on the HSK lists itself, but is composed of “男”, which is on the lists, and “子”, which shows up quite frequently on the lists as a suffix for concrete nouns).

Verdict: If you’ve learned the HSK 3 vocabulary, you can probably handle this book without too much trouble.

Here is a chart showing the fraction of each book that's covered by words on each HSK list, and here are word and character counts for those readers.

Is this book good practice (e.g. for the HSK exam)?

Setting aside grammar and how complex the sentences are, I looked to see if these books at least provided practice reading and understanding the words on the HSK vocabulary lists. Generally, using more of the words on the lists, and using the higher-level ones more frequently (because they often require more practice for students), is good.

Verdict: So this book doesn’t actually seem great for practicing reading for the HSK exam. I’d want to see more of the HSK words used, at least at the HSK 3 level, since it clearly requires familiarity with many of those already.

(There are books that are written specifically for this, for example the HSK Academy series, which uses all of the words from the target HSK list in the story and almost no others.)

This table shows how much of each HSK vocabulary list is used by each book.

And if we pick a single vocabulary list (say, HSK 3) to compare against Secrets of a Computer Company, you can see both how many additional characters you’d need to learn to read the book (assuming you already know the HSK 3 characters) and how much of the HSK 3 it lets you practice: 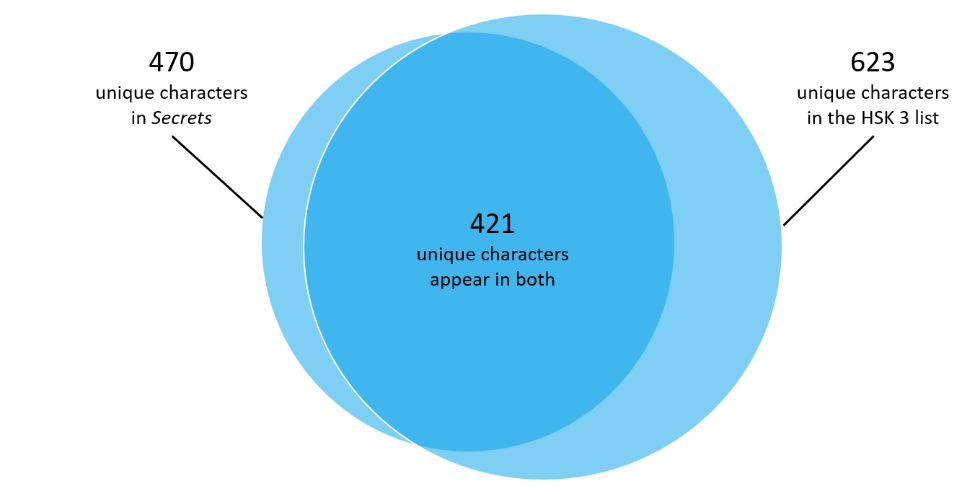 Still quite a few to learn. BUT! I still recommend this book for someone who’s at least at the HSK 3 level. It’s a fun read, it’s formatted in a way that makes it less painful when encountering words you don’t know (e.g. with a glossary and footnotes for difficult vocabulary), and I’d much rather read a book that’s slightly too easy rather than slog through one that’s got me scratching my head trying to remember advanced vocabulary every other sentence.

Which are the most fun to read? The biggest difference in graded readers

The quality of the stories does vary, but most graded readers are pretty good. Mandarin Companion has my favorite stories—reading those (mostly adaptations of Western classics) was the first time I found myself really struck by the characters or story in anything I read in Chinese. Chinese Breeze has its own (new) stories, all fiction, and are generally light and fun. Sinolingua has a series of graded readers from 500 words to 3000 words with abridged versions of stories by contemporary Chinese authors that reflect the everyday lives of ordinary Chinese people. These are quite interesting AND they’re available as part of the Pleco dictionary app for Android or iPhone. Which brings me to the biggest difference in the various readers….

It’s really in the formatting. Pinyin interspersed with the Chinese characters is very distracting for me, although having easy access to the text in pinyin provides a good reminder of the pronunciation of a word without having to go look it up with a camera or writing it by hand into a dictionary app.

Most readers (e.g. Chinese Breeze) handle this by providing footnotes with the pinyin and definition of a few less common words. The Herd Boy and the Weaving Maid, as well as all of Imagin8’s books, handle this by putting pinyin on the opposite page from the Chinese characters so that you can reference it for any character as needed. This doesn’t work so well for e-readers like Kindle, however, that show you only one page at a time. In theory you should be able to just click on a word on the Kindle and see a definition, but oddly enough I haven’t seen a dictionary for Kindle that lets you see the definition and the pronunciation of Chinese words.

The winner on this front is definitely the readers that are available on the Pleco app. They are integrated with Pleco’s excellent dictionaries, so a quick tap suffices, along with an option to add the word to a flash card. If it’s a word I mostly know, it can take me literally less than a second to remind myself of a word’s tones, or I can spend a bit more time and learn the meaning of a totally unfamiliar word. This makes it so much easier and more fun to read even stories that are really above my level. And as an added bonus, any of the readers on Pleco allow you to read the story in traditional or simplified characters.

Here is a comparison of the different features available in each of the series I looked at.

Verdict: I love the stories that Mandarin Companion has, but the readers available on Pleco have a huge leg up on the reading experience.